The wild west days of SaaS are coming to an end 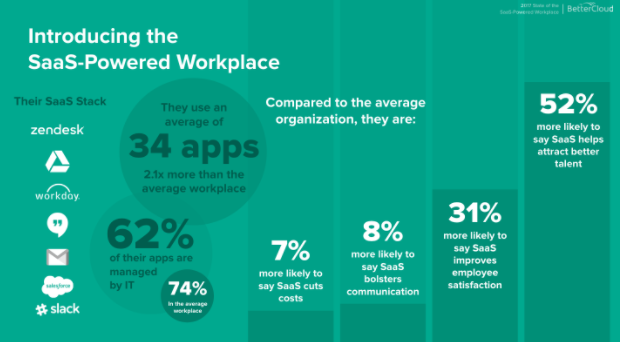 BetterCloud recently released findings from their annual survey, “The State of the SaaS-Powered Workplace,” in which over 1,800 IT executives were surveyed about the adoption of, and challenges with, SaaS apps in their companies. In this survey, BetterCloud provides early adopters (and their more cautionary kin) a view of what’s happening on the frontier of SaaS adoption. As a SaaS application adopted by many internal IT departments (not to mention a heavy SaaS shop for our own IT team), Zendesk understands the value of best of breed SaaS architecture.

“There hasn’t been an on-premises software company funded since 2007,” said R. “Ray” Wang, a principal analyst at Constellation Research. “You have no choice. It’s all going to be SaaS.” SaaS is no longer just the future of software, it’s firmly established in the present. SaaS adoption is happening more rapidly at SMBs (44% vs. 29%) where companies were less likely to have invested in legacy, on-premise systems; or are more likely to have launched in the past five years and so not had to worry about getting stuck with legacy solutions.

The challenge, especially for CIOs at larger companies, is that CIOs traditionally have a risk-averse mindset. They’re used to working with legacy/on-premise systems which are inflexible but perceived as safer. As a modern CIO, your impact needs to be quick and meaningful. You cannot afford to fear risk. Shifting to the cloud and adopting SaaS solutions provides companies with speed, agility, and business model flexibility. BetterCloud projects mid-market and enterprise organizations to close that gap significantly in the next 3-5 years.

BetterCloud’s research has identified a leading set of SaaS providers; the emerging SaaS stack that early adopters and modern IT teams have adopted to propel the business forward.

These leaders cite lower costs, better communications, and a positive impact on recruiting through attracting better talent and improving employee satisfaction. When a company has reached a tipping point on SaaS adoption, BetterCloud calls this a “SaaS-Powered Workplace.”

This rise of SaaS apps has a big impact on how companies view internal data sources. Instead of a single “source of truth” for data existing in the enterprise on a behemoth enterprise resource planning (ERP) implementation—one that took one year to procure, another 18-24 months to deploy, and will handcuff the business moving forward—there are now multiple systems of record for each department.

Companies need SaaS solutions that are flexible, standards-based, extensible, and customizable for their specific business needs, combining these systems of records into systems of engagement or systems of intelligence.

Zendesk combines a solution that is powerful, simple and flexible. For instance, many of our customers deploy Zendesk to meet the needs of (external) customers, as well as (internal) employees. “Since we’re a data-driven organization, the use of custom fields and tagging has been really wonderful. We can pull in every piece of Zendesk data into our internal database—furthermore, we can slice and slice that data, and join it with internal data to create an extraordinarily vivid picture of the customer journey,” said Jeremy Flanagan, Customer Ops Project Lead of Tools at Instacart.

That statement could apply to external or internal use cases, which is great because Zendesk Support is a flexible off-premise solution with a lower total cost of ownership, that can be extended to internal stakeholders, outsourced solution providers, or external customers.

To succeed, IT teams will need to take a fresh look at roles and responsibilities, processes, and budgets. Thanks to BetterCloud for collecting and sharing lessons from the SaaS frontier.

Read the full report: “The State of the SaaS-Powered Workplace”

Learn how companies are scaling internal support with Zendesk