Today is a great day at Zendesk and we have 6 million new reasons to be excited!

First, we’re psyched to announce two new Zendesk editions today. A Solo edition for independent consultants and home-based businesses, and a Plus+ edition for the somewhat larger companies with stricter governance requirements. The new editions constitute a big strategic step for us. Zendesk has been implemented in large organizations with thousands of employees and up to a hundred support reps, and in tiny boutiques with one agent and 25 customers. We knew we had to differentiate our offerings to be able to cater to all these different needs, but at the same time it was also critical that we kept the simplicity of the application and the transparency of the different editions. We think we have achieved that with our new offering, and we look forward to receiving your feedback. You can get all the details on the two editions of Zendesk at our brand new and snazzy web site. 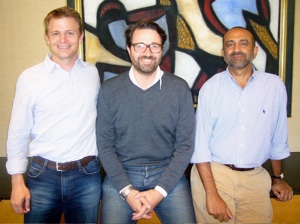 Were also very excited to announce weve secured $6 million in series B funding and that Peter Fenton from Benchmark has joined our board. We closed this Series B much earlier than required, but the stars aligned and we felt that Benchmark was the exact right partner at the exact right point in time. The team at Benchmark has done incredible things in the SaaS and consumer technology markets and we look forward to tapping that energy to take Zendesk to a new level, fueling the momentum we’ve experienced in the last year. Pictured to the right you can see Peter, yours truly and Devdutt from Charles River Ventures. Devdutt’s done a fantastic job with us the last six months, and we’re really thankful for Charles River’s continued support as they’re joining the B round pro rata.

We have a lot of stuff up our sleeves. We have a very active customer community and we simply love all the feedback and feature requests that we get. We won’t be able to get it all done at once, but most of the stuff that you’re requesting will come as soon as we’ve found a “beautifully simple” way of implementing it. Stay tuned for more.

You can read the full press release on the new products and the Series B below the fold, but allow us to take this opportunity to thank some of the people around us that have made it possible so far: The early friends & family investors who put their personal money into this project, Christoph Janz, possibly the best angel investor a start-up can have, our first employees that have worked so hard for so little, the reporters that have followed us from early days, and last but not least, all of our utterly incredible customers. Thank you Crystal, David, Jake, Mike, Graham, Björn and the rest of you. Thanks for inspiring us to do our best.

BOSTON, MA. (August 17, 2009)  Furthering the mission to bring good help desk karma to organizations around the globe, Zendesk announced today that it has secured $6 million in series B venture funding. Silicon Valley-based Benchmark Capital led the round while previous investor Charles River Ventures participated pro-rata. The funding will be used to expand operations, including opening a San Francisco office, and to continue to build products that are inspiring the help desk 2.0 movement. As part of the deal, Peter Fenton of Benchmark will join Zendesk’s board of directors.

“Zendesk has taken the support industry by surprise by bringing to market a product that is as solid as those of our enterprise counterparts but at the same time so easy to use that it’s a treat for the socially networked generation. Devdutt and CRV were quick to realize the potential, and Peter and the Benchmark team are now ratifying the vision. We’re thrilled about the unique combination of SaaS and consumer technology experience that Benchmark brings and couldn’t dream of a better and more exciting partner to work with in the industry,” said Mikkel Svane, CEO of Zendesk.

“We live in an era where great products quickly stand out–users sing their praises and the word spreads immediately. Two of our portfolio companies, Twitter and Engine Yard, raved about Zendesk, and we discovered enormous momentum around the product” said Peter Fenton, partner at Benchmark Capital. “Zendesk really spoke to us as a company that helps businesses elegantly respond to the needs of their users, particularly when user support has been viewed historically as a necessary evil.”

We have always believed that Zendesk has the perfect combination of simplicity and usability that inherently appeals to large and small businesses alike, said Devdutt Yellurkar, partner at Charles River Ventures. Mikkel and his team have generated astounding traction in the market, which comes from a strict focus on building a great business while delighting customers.

For nearly two years, Zendesk has helped companies large and small move their help desk and customer support operations to the Web. Today more than a thousand customers, including Twitter, MSNBC, IDEO, Books-a-Million and Scribd, use Zendesk to improve their help desk functionality and provide better customer support. Zendesk enables service managers to easily create business rules, service targets, and track and consolidate requests from all channels. Zendesk comes with native email integration and offers an extensive set of APIs. Pricing is $19 a month per agent with an introductory price of $39 for the first three support agents.

Zendesk Plus+ extends the features that are already available in Zendesk while providing additional features that are aimed to help give IT managers peace of mind. Features include SSL certificate hosting, remote back-up, real-time reporting, sandboxing, phone support, and the ability to work within multiple time zones and languages. Zendesk Plus is $39 per agent with an introductory price of $99 for the first five agents.

“Yammer is the leader in enterprise micro-blogging, supporting 40,000 companies and their employees with a Zendesk support portal.  We love Zendesk’s SaaS offering for the excellent user experience, easy administration, and their ability to scale with our customer service volume,” said Travis VanderZanden, vice president of business development at Yammer.

Zendesk is inspiring the help desk 2.0 movement through a focus on enlightened customer support. By leveraging the benefits of Web-based communications and social media, Zendesk extends good help desk karma to any company looking to offer professional-grade support service with very little effort. Backed by Benchmark Capital and Charles River Ventures, Zendesk was founded in 2007 and has more than 1,000 customers including Books-a-Million, IDEO, John Lewis, MSNBC, Scribd and Twitter. To learn more, go to www.zendesk.com or follow @zendesk on Twitter.

About Charles River Ventures
Founded in 1970, Charles River Ventures is one of the nations oldest and most successful earlystage venture capital firms with approximately $2.1 billion under management. CRV is dedicated to helping exceptional entrepreneurs turn their ideas into the next category leaders in high growth technology and media sectors. Over the past 20 years, CRV funds have been ranked among the industrys top performers. CRV has offices in Boston, MA and Menlo Park, CA. For more information, visit www.crv.com.

Cutline for Zendesk and Benchmark Capital