This fall, the Labour Party of Ireland lobbied in favor of the Lisbon Treaty referendum and used Zendesk to manage constituent questions about the Treaty and how it effects them.

“During the recent Lisbon Treaty referendum we were looking for a solution to handle queries from the public, and the solution we found was Zendesk.” said Tom Duke, the Labour Party’s Webmaster. “A couple of days after signing up we had customised the app and our policy team were populating the forums, a day later we were live and accepting
queries. We will definitely be using Zendesk again in the next Irish general election.”

The Labour Party used Zendesk’s public forum as their FAQ page, as well as implementing a help desk where visitors can submit their questions and queries.

By enabling a simple process for voters to ask specific questions, which were answered by real people, the Labour Party hoped to educate voters to say ‘Yes’ to the Treaty. An effort that was rewarded on 2 October with a whopping 67% of the population voting yes. 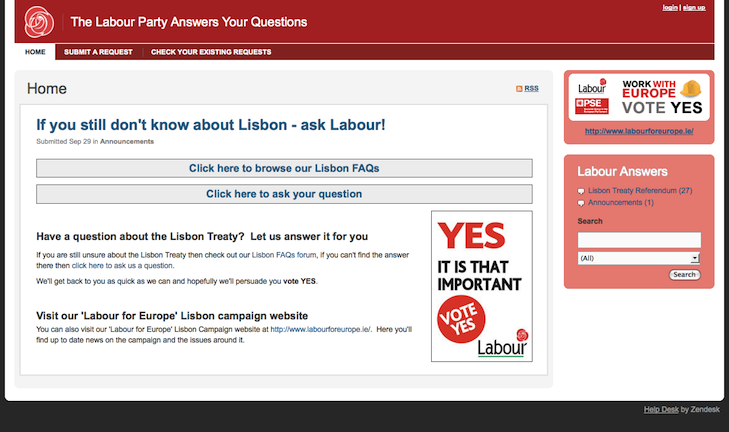 This is one of the coolest uses of Zendesk we’ve seen for a while – voter education and political process flow tool. Remember to share your Zenfessions too on inventive Zendesk implementations.